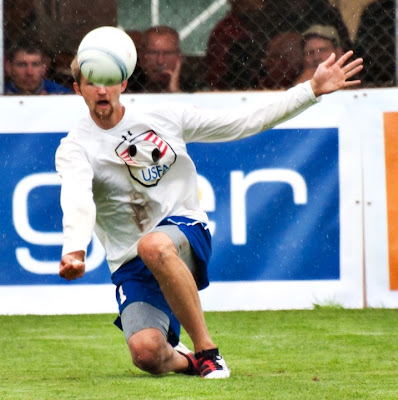 While members of the 2011 Warhawk football team were checking into camp at the Student Athletic Complex, Kindler sat on the floor next to Tom Lange watching his fistball mates play in Team USA’s final game in Austria.

The Americans had never finished better than 12th at the World Championships. Team USA finish 9th earlier this month.

The sophomore from Germantown, Wisconsin has been playing the sport of fistball since he was nine years old. At 15 years old Eric was the starting center for Team USA in the 2007 World Championships held in Germany.

You don’t normally think of kickers as athletes however, Kindler was a quarterback, kicker and punter while at Germantown High School.

Team USA is based in Wisconsin and is made up of select individuals from three regions across the country – the greater areas of Milwaukee, Newark (NJ) and Philadelphia (PA).

For an explanation of what exactly is Fistball CLICK HERE